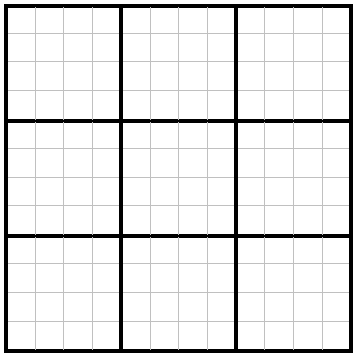 Notice that the 12x12 grid is divided into 4x4 blocks - the same size as Magic Square A, and these blocks are arranged in a 3x3 pattern, just like Magic Square B.

Take one of the empty grids, and make lots of copies of Magic Square A, like you see in the picture below. 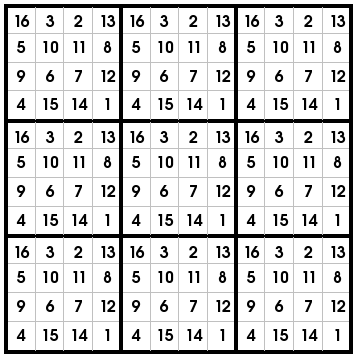 Already, this is sort of a magic square, since each row, column or diagonal adds up to 102. However, each number is repeated many times, so we can do better than that.

Leave this grid aside for the moment, and take another copy of the empty grid. Each block corresponds to one cell of Magic Square B. Fill each block with the corresponding number from the magic square, as shown below. 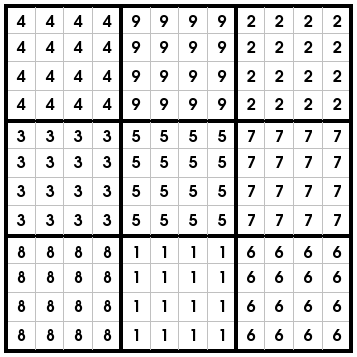 Again, this is sort of a magic square - each row, column or diagonal adds up to 60.

To get a proper 12x12 magic square, using the numbers 1 to 144 each exactly once, we have to do some arithmetic. First, take the second big grid, and do the following steps :

When I do that with my example, I get this : 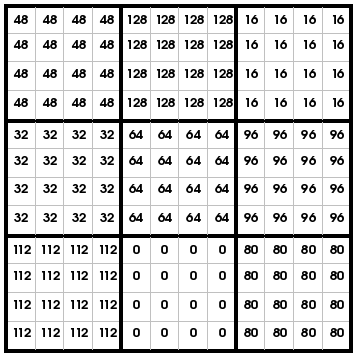 To build our final 12x12 magic square, take this grid, the first big grid, and a new empty grid. Then, add together the numbers in corresponding cells. 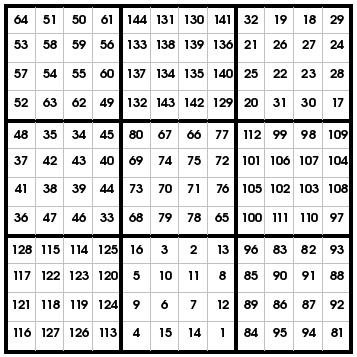 In the end (unless I make a mistake!) I have a 12x12 grid containing each of the numbers from 1 to 144 exactly once. Each row, column and diagonal adds up to the same number (870). In other words, I have a magic square!

How can this be used for teaching?

Obviously, it takes a lot of arithmetic to get the result. Since there are no 2x2 magic squares (and using the 1x1 magic square doesn't lead to anything very interesting), the smallest possible magic square you could make using this method would be a 9x9 magic square (by combining two 3x3 magic squares). You'll have to judge whether your class can handle the amount of arithmetic needed - however, it might be ideal for an advanced class that's excited about magic squares.

On the other hand, this method might make a perfect programming exercise for students learning how to program computers...