There are many ways you could use this recipe to help teach kids math.

This recipe works to generate an odd order magic square - that is, a magic square with an odd number of squares in each row, column or diagonal. So if you want a four by four or a six by six magic square, I'm afraid you'll need a different recipe. Anyway, on with the show...

Start by drawing a grid of the desired size. If you like, you could print out the grids provided here. Then, you draw the number '1' in the middle of the top row of the grid. You should have something like what is shown below. 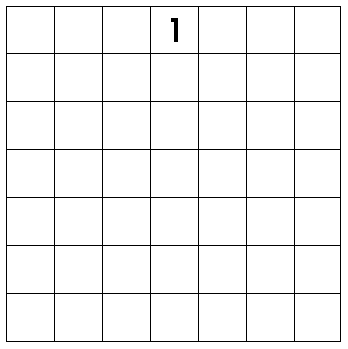 The basic pattern to this magic square recipe is simply to write the numbers in the square, starting with the '1' you've already drawn, and diagonally up each time. See the picture below and you'll get what I mean. After writing 15, I wrote 16, then 17, then 18, and so on. Each time, the next number was one column to the right, and one row above, the previous number. 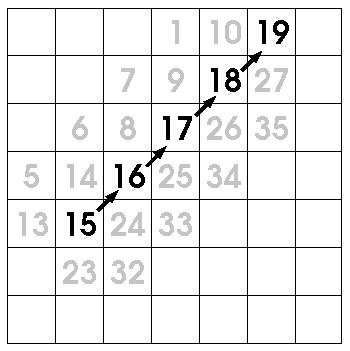 Of course, if you try that, starting from '1', you immediately have a problem. Moving diagonally up takes you off the grid! The solution to this is to let the grid "wrap around", so 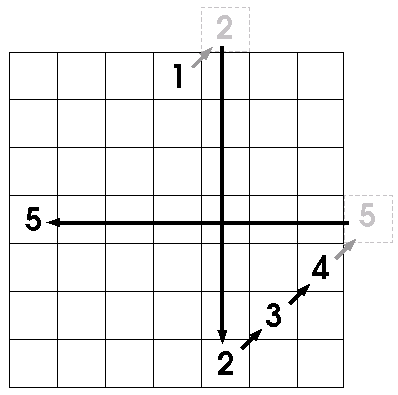 Soon, though, you'll come against a problem that can't be solved by wrapping around - namely, the "diagonally up" rule takes you to a grid cell that is already occupied! The picture below illustrates this problem, and the solution. The solution is simple enough - instead of moving diagonally up, just move one step straight down. 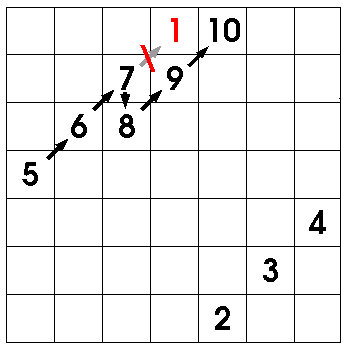 Before you know it, your magic square will be complete! In the example used here, the very last number drawn is 49. If you tried to keep going, where would the next number be drawn? Amazingly, it would land back at the very place you started - the center of the top row, with the number 1. 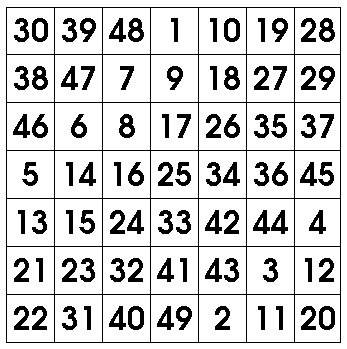 In the 7 by 7 magic square used in this example, every row, column and diagonal adds up to 175. It also has an interesting property, that opposite numbers always add up to 50. No matter what (odd) sized grid you start with, this will be true - that is, 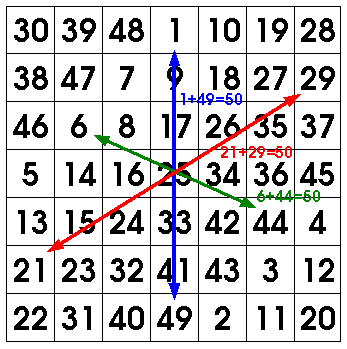 When you follow this magic square recipe, you'd surely like to know whether it's worked out al dente or not. So I give below the values you should get for the "magic number" and the "opposite number" for different sized squares, and also the number you should see in the middle of the magic square.

Well, that's all for this magic square recipe. I hope it was clear and helpful, and I hope you can use it to "cook up" some great magic squares for your children or classroom. Don't forget the ideas I gave at the top of the page for how to use this recipe to help kids with their math!