Start by drawing a grid of the desired size. Then, divide the grid into 16 equal sized square blocks, as shown below. For a four by four magic square, each block will be a single cell. For a 12 by 12, each block contains nine cells, and so on. 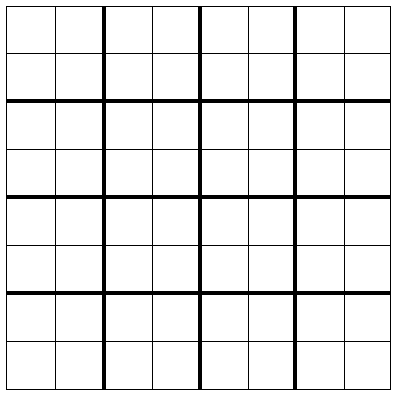 Then, you start writing the numbers 1, 2, 3, and so on into the grid. However, instead of writing from left to right starting from the top, you do the opposite. You also skip certain blocks. That is,

If this is a bit confusing, perhaps the picture below will help. The numbers printed in black are the ones actually written. The ones in gray are merely counted off. The last cell you fill should be the top left, and its number should be 16 for a four by four square, 64 for an eight by eight, 144 for a twelve by twelve, 256 for a sixteen by sixteen... that's right - the last number drawn should be the number of cells in the whole grid. (You did just count them, after all.) 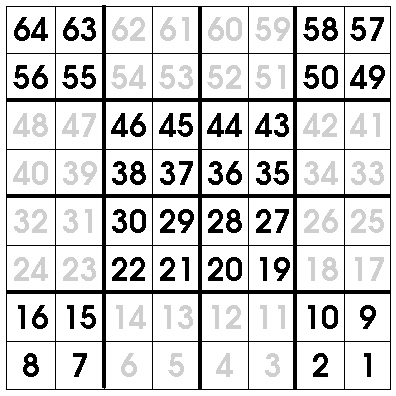 Then, you fill in the empty squares, this time starting from the top left, and numbering from left to right in the normal way. If a cell already has a number, just count it off. If it's empty, write the number in the cell.

Finally, you have your magic square! 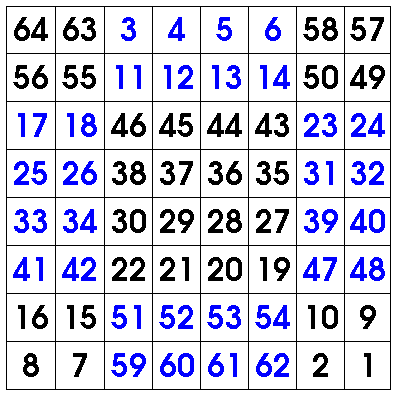 Like the magic squares produced by the other recipe, opposite numbers always add up to some fixed number. Whatever size grid you use,

I give below the values you should get for the "magic number" and the "opposite number" for different sized squares.

Well, that's all for this even order magic square recipe. I hope it was clear and helpful, and I hope you find good uses for it!