Magic squares have a history dating so far back they disappear into the boundary between history and myth. From ancient Chinese literature we have the following story :

At one time, there was a huge flood. The people tried to offer sacrifices to the god of one of the flooding rivers, the Lo river, to calm his anger. As they were doing this, a turtle emerged from the water with a curious pattern on its shell, with patterns of circular dots arranged in a three-by-three grid on the shell, such that the sum of the numbers in each row, column and diagonal was the same: 15. The people were able to use this magic square to control the river and reduce the flood

The pattern described here is the three by three magic square, shown below : 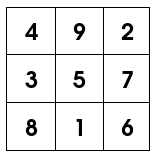 This same square inspired the floor plan of the Ming'Tang palace, a mythical ancient Chinese palace. In fact, ancient Chinese literature is peppered with references to this square from 2800BC to 570AD.

In ancient Greek writing, references are sparse. It is said that Greek mathematicians as far back as 1300BC wrote about magic squares, but I could not find any further details about that.

In first century Turkey (in a town called Smyrna) there was born a man called Theon. He would explore mathematical concepts that are still interesting today, including square numbers, triangular numbers, and many others. It is often said that he also wrote about the 3 by 3 magic square, but in fact he did not. He did write about ways to arrange the numbers 1 to 9 in a grid, but not in such a way that the rows, columns and diagonals would all have the same sum.

Interestingly, the Indians seemed to know about order 4 squares before order 3 squares. As far back as 550AD, Varahamihira used a 4 by 4 magic square to decribe a perfume recipe, but the earliest known Indian writings about an order 3 square comes from 900AD, as a medical treatment!

Magic squares were introduced into Europe in 1300AD by Manuel Moschopoulos, who probably learned about them from the Arabs. He wrote a number of works, with his treatise on magic squares being his only mathematical work. The most famous European work involving magic squares is perhaps Albrecht Durer's engraving 'Melancolia', from 1514. The magic square in his artwork is shown below. If you click on the image you will see the full engraving, hosted at the University of Hamburg. The engraving is "an allegorical self-portrait" showing the melancholy of the artist. The year of the engraving is, in fact, cleverly hidden in the bottom row of the magic square!

In the five centuries since Durer, writings about magic squares have become more and more common. Ben Franklin played with 8 by 8 grids which were similar to magic squares. Entering the modern era, magic squares became so widely known, and became such a common subject of research and recreation, that it would be impossible to list everything written about them!