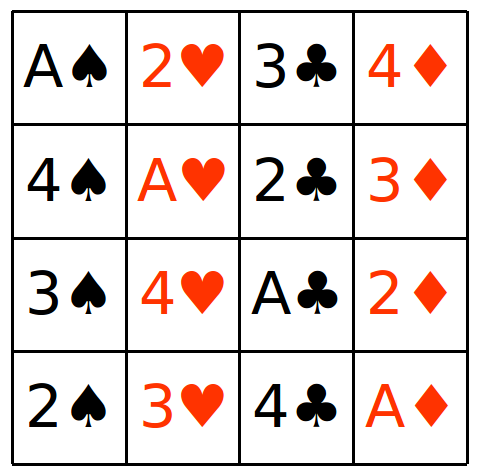 The most recent game I uploaded to this site is a Printable Latin Square Puzzle. The goal of the puzzle is to arrange a set of 16 cards into a 4 by 4 grid, following certain rules.

On the puzzle page, I provide some downloadable printable cards. You could use them, but cards from an ordinary pack of playing cards will do. You only need sixteen cards, for example, all the aces, twos, threes and fours, four from each suit.

When you’ve solved the grid, each row, column and diagonal, and some other blocks of four, will have one card of each number, and one of each suit. It’s like a miniature Sudoku puzzle on steroids.

Here’s an example of a failed attempt to solve the puzzle. It’s not a solution because the columns don’t have one of each suit:

However, each row is okay. Each row has

We can turn this into a grid of numbers simply by allocating points for each suit and number. For example,

For example, the 4 of hearts is worth 12 points. Then, my grid will look like this:

If I’d actually found a proper solution to the Latin Squares puzzle, and converted it to numbers, every row, column and diagonal, and a whole bunch of other blocks of four cells, would also add up to 34. I’d have a magic square!

I didn’t have to allocate points exactly the way I did here. As long as one group of “things” (suits or numbers) gets 1,2,3 and 4 points allocated to them, and the other group of things gets 0,4,8 and 12 points, a solution to the Latin Squares puzzle will give you a magic square.

But not vice-versa! There are many 4×4 magic squares that don’t come from solutions to this puzzle!