In case you haven't heard of Timez Attack, it's basically a computer game for teaching times tables. I found out about it when a subscriber to this website's newsletter suggested I have a look. Her exact words...


I am a homeschool parent.... I don't know if you endorse other people's products, but this game is awesome for learning times tables! My kids love this game! It is called Timez Attack and can be found at this site: https://www.bigbrainz.com/index.php. I have no affiliation with the company, just happened across it one day and tried it out. I hope this helps someone

So, I decided to give Timez Attack a try, and write a review of it. I, too, hope this review helps someone. Alas, the paid version of Timez Attack is only available for schools now, but read on...

A couple of things you should know up front.

Elsewhere on this site, I have a review of Arithmemouse, a similar game, and I also compare the two games side by side. If you're looking for just the right game for your child, take a look at these other pages too.

What is Timez Attack?

The player explores a dungeon with a little green monster who looks a bit like he might be Shrek's distant cousin. From time to time, there are doors with times table challenges. Behind the door, the player must answer more times table questions. At the end of the maze is a big monster who will force the player to get a whole bunch of times tables facts correct, quickly, or be sent back into the maze.

I'd have to answer this with a definate yes. Each level teaches one times table, starting with the two times table. At each door, the player is presented with a times table fact, and told the answer as they collect the creatures. Then, the player must type in the answer they've just been told. After that, they must get a minimum of three times table questions correct. This is repeated twelve times.

Counting in the questions asked by various "boss monsters" met along the way, The player will answer correctly a minimum of 80 times table facts on each level (probably much more). That's 800 for the whole game! (The 1 times table and 10 times table don't have their own levels)

Furthermore, the facts are presented with just the right timing to encourage learning

This all depends. It depends on your child, and it also depends on whether you paid for the game or are using the free version.

My son is not really "into" computer games. He'd rather be building things with his hands, or running around outside (although he did spend a couple of months playing Mathteroids every day...) He's now finished all ten levels a dozen or two times, and his times tables knowledge has vastly improved. However, there was a time when he lost interest for a couple of months (I told you this was an honest review!)

News Flash: My son came home the other day and reported that he was the times table champion in his grade 3 class! Wow!

On the other hand, some kids love it from the start - and not just ones giving the testimonials on the Timez Attack Website. If your kid is glued to the Xbox, you may find Timez Attack works wonders - especially if you tell them that "Timez Attack" is a game they can play without time limits!

When my son finally finished level 12 for the first time, the screen shows a nice badge, with the words "Certified Timez Attack Champion" or something like that. I took a screenshot, changed the background color to white, and printed it out for my son. He loved that, and later we had this conversation..

As I said, he's now finished it about 4 or 5 times... So it's a lot more fun for kids than I first thought. 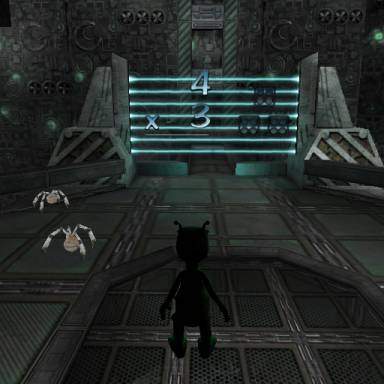 Timez Attack is most certainly an educational game for kids learning times tables. It's a "real" computer game, with 3D graphics, snazzy music, joystick control, and so on. It's also educational, presenting the times tables in a way that really does help kids learn.

My recommendation? Download the free version (it's about 50-60Mb), and try it on your kids. If they take to it, and if $39.99 won't break your budget, cough up the dough for the paid version. And whatever you experience, let the world know in the comments field below...

There's also a school version which allows teachers to track how well kids are doing in the game.