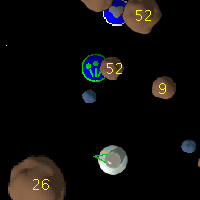 If you loved the classic asteroid video (arcade) game by Atari, you'll love to introduce your kids to Mathteroids! In this (free!) math asteroid shooter game (scroll down to play!), the player controls a rocket using the arrow keys or the mouse. At various times, asteroids float across the screen, and when hit, they break into smaller fragments.

Mathteroids the Math Asteroid game is written in java, so if your PC prompts you to download something called the 'java plugin', just say yes. Then you'll be able to play away! At last! A fun action game that also boosts your math skills!

News Flash! Mathteroids is now available for PC or Mac. Special Discount For You Now

The latest version of Mathteroids includes

See if you can beat the high score!

If you beat the high score, your score should appear here. Be sure to explore the other Online Math Games or Times Tables Games on this site!