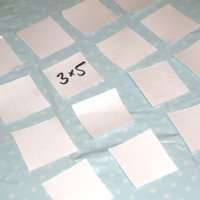 This game is perfect for those kids who need a break from times tables drills, and who prefer quieter games than Times Tables Snap or other times tables games. It can be played solo, or as a competitive game between, say, two to four players.

First, download and print out (preferably onto cardboard) some cards to use in the memory game. There are two sets of cards, one containing a whole bunch of times tables questions, and another containing the answers. Cut out all the card, or just the ones your child needs to practice on.

Don't mix the question and answer cards. Instead, shuffle them in two separate decks, then lay them out face down in two grids - one grid full of questions, the other full of answers.

On each turn the child turn over one answer card and one question card. If they match, they get to keep that matching pair and have another go. If they don't match, they turn the cards back face down. Play then passes to the next player, if there is more than one player.

The reason this game works so well to help kids is simple. If a child takes more than about 15 seconds to decide on their second card, they begin to move beyond the scope of short-term memory. The question and its answer begin to be associated within their long-term memory. This is, of course, exactly what we want to happen.