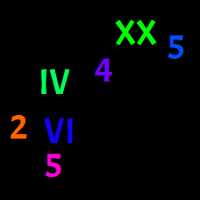 We write numbers using the digits 0 to 9. The ancient Romans used a different system - with letters I, V, X, L, C, D and M representing 1, 5, 10, 50, 100, 500 and 1000. The letters would be combined in different ways to represent different numbers - so 1729 would be MDCCXXIX. We still use Roman Numerals today - for example, to number the pages in the preface of a book, or sometimes the volume numbers in an encyclopedia.

In Roman Attack, your job is to convert numbers between the two formats - Roman numerals, and the system we use today, called Arabic numerals. You can enter your name and the computer will record your high scores. Challenge yourself each day to see if you can beat your previous best!

This game won't work on a mobile device - unless somehow you have a keyboard attached! I intend to make mobile versions of Roman Attack at some point in the future. If you'd like to get an email when the they're ready, sign up for my newsletter!

I also have a game just like this one, but for arithmetic problems