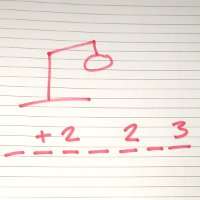 A while ago, I got this email from a teacher called 'K'.

I am looking for a game to play on a chalkboard with a large group of 2nd-5th grade students. In the morning, before school begins the kids (2nd-5th) come into the gym and sit while waiting for the bell to ring to go to class. They sit there bored (most don't bring books) I have started playing games on the chalkboard (hangman...) to help get them thinking before class. I was hoping to find some math games to play also. Something I can lead and take charge of, they need to stay where they are seated (the floor) and not be too loud. Any suggestions?

Tough call! This site does have some large group games, but not many that fit her criteria

Some of the games could be adapted to this situation, for example Fizz Buzz, or maybe some of the Magic Square Worksheets or The Making Numbers Puzzle. This Magical Addition Trick might keep the kids amused, but would go over the heads of the younger kids.

Then, I thought, K may have already provided the answer! Why not play a math-themed game of hangman? The unknown 'words' would all be mathematical in nature - names of shapes and other concepts, or even arithmetic sums. For example, the teacher might decide the hidden 'word' is 1+2+3+4=10, and write this on the board :

After guessing a few letters wrongly, maybe, the students would guess '1'. Then the teacher would write all the ones.

After that, it's just trial and error - and a bit of mental arithmetic - before the whole sum comes out! Not convinced? I've put up a simple version (multiplication problems only) of math hangman online and called it Multiplication Strikeout. Have a go, and see what you think!

Of course, hangman need not be played only in a large group. It wouldn't surprise me if the kids in K's care start playing math hangman between themselves during recess.

Anyway, huge thanks to K, for the idea, and I'm sorry I didn't reply directly. Your email came through with no return address!