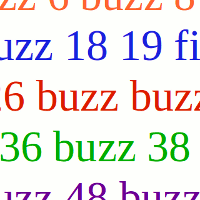 I loved this game in primary school. It's a great kids math game, especially for those needing times tables help. The rules are so simple, but force players to quickly analyse a number in several different ways. It helps push certain multiplication facts into long-term memory, by associating them with strong emotions - the excitement of the game, or the frustration of making a mistake. And by the way, it makes a decent ice-breaker game for adults too - except that adults seem to have more difficulty than kids!

To play "fizz-buzz", you need several people. They should stand, or sit, in a circle. One person is chosen to start the game, and players take turns around the circle. When the person starts, they start by saying a number from 1 to 99. (When you are teaching a class the game, they should probably always start from 1.)

This is where the game gets interesting.

In case this is not clear, the form below will help you resolve conflicts - it will "fizz-buzzify" any positive number you key in.

The pressure really climbs when the players get into the fifties. Then, there's the double challenge of both figuring out how many fizzes and buzzes to say, and just keeping track of the numbers being spoken! The game might go like this :

I hate to think what it would be like to start from 699!

Here's some ideas to vary the game.

There are more times tables games on this site too.