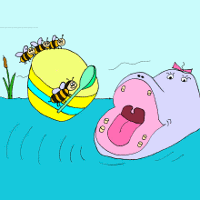 If you download and print the gamesheet now, you'll see the picture has some bees holding a bowl above a hungry hippopotamus. There's also a black and white version in case your printer doesn't support color well, or in case you'd like to give your kindergarten kids some coloring practice.

Anyway, once you have the picture printed out, you can use it as follows.

Of course, you let the poor kid eat the hippo's sultanas after that.

A four to six year old will not always sit quietly and obediently through this exercise. However, as for the kindergarten addition game, children will quickly learn to pay attention, if you make sure that it's by paying attention that they earn sultanas. Then, as you repeatedly play the kindergarten subtraction game with your kindy kids, you'll find it quickly reinforces the concept of subtraction in them. Soon, it will be second nature.