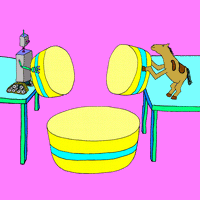 This kindergarten addition math game, or addition worksheet, is not a worksheet in the traditional sense. However the kids in your care are sure to love it, because it combines math concepts with their favorite food and a colorful picture. If you download and print it now, you'll see the picture has a horse and a robot, each holding a bowl, with a large bowl in the middle.

My four-year-old was trained with something like this in his kindergarten. When I drew the pictures on these worksheets, he wanted to play again. So I got some sultanas from the fridge. Melvin really likes sultanas. The kid you want to teach may prefer cornflakes, or mini biscuits, or any other "finger food". Obviously sweets are not such a good idea, and nuts are not generally advised for kids under five.

I put a few sultanas in the robot's bowl, and also in the horse's bowl. Then I asked him, "How many sultanas does the robot have?" He counted them, and gave me the answer.

"What about the horse?"

Then, I told him "now they pour all the sultanas into the big bowl" and swept them down with my hand.

"How many in the big bowl now?"

I was delighted at his answer. He responded without counting, and barely even looking at the bowl.

Of course he got to eat all six sultanas after that, and a big extra handful to boot!

Will this work for your kid?

It certainly should! Here's a suggestion or two for how you could use the worksheets

What could go wrong?

A four to six year old will not always sit quietly and obediently through this exercise. However, if it goes smoothly for four or five days in a row, it will be very close to a habit for the child. It's worth enforcing your ground rules for the child from day one.

When all goes well...

So, I hope this kindergarten addition game helps your kid as much as it helped mine. If all goes well, your child will "just know" what are three and four, or four and five, or one and seven, and so on and on.

If it works well for you and the children in your care, you'll probably also want to get the kindergarten subtraction game that I've explained on another page on this site.