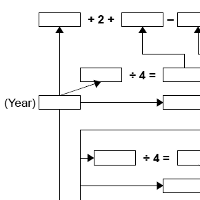 Easter Sunday is defined as the First Sunday after the first full moon after the 20th of March. Interestingly, the words "full moon" don't quite mean what we usually mean by a full moon - a night when the moon is full. If it did, Easter Sunday would have to be on different days in different parts of the world! Instead, some early church astronomers calculated a formula for the date of the full moon (a remarkably good formula, that's almost never wrong). So, when we talk about Easter and say "the first full moon", we actually mean the date of the full moon given by the formula.

The early astronomers gave their formula in terms of a table. You'd look up the year in the table, and know when the "full moon" was supposed to be. There was also a method for extending the table to future years.

In the 16th century, things got complicated - people realised that the calendar they had been using was slightly wrong. There were too many leap years, making the year too long on average! A new calendar was invented that would fix the problem. The new calendar, called the Gregorian calendar, had fewer leap years than the old one. It also adjusted the date to make up for the extra leap days added over the centuries.

Because the new calendar was more complicated, the formulae for calculating Easter became more complicated. One of the best mathematical minds ever known, a German mathematician called Carl Friedrich Gauss invented a set of formulae that he thought would work. He got it almost right - his formulae are only wrong once or twice every 200 years.

Finally, in the 19th century, an anonymous article appeared in the New York Times, giving a formula for the date of Easter that would work for any year in the Gregorian Calendar. Later, in the mid-20th century, a certain J.-M. Oudin came up with a similar formula.

Oudin's formula for Easter Sunday's date needs nothing more complex that addition, subtraction, multiplication and a little long division (with remainders). This means that an elementary school child could use it - except that it's normally given using variables for values calculated along the way. Most kids don't learn algebra until a long time after long division.

So, I decided to make a worksheet out of his formula, so that kids with no knowledge of algebra can use it. First, I worked through his method, simplifying it as much as possible (not very much, as it turned out). Then, instead of variables, values are written in boxes, and arrows linking boxes show how the values should be copied from place to place.

I'd suggest that this worksheet would make an excellent (and themed) arithmetic practice worksheet. Don't worry, only a couple of big numbers come up (the most complex calculation would be dividing the year by 19 and finding the remainder)

You can download the worksheet from here. Write the year in the box marked 'Year', calculate, copy, and calculate again, and find out what date easter is in the year you chose.

Here's some suggestions for how it might be used...

So that you can check your kids' work, I've provided a little Easter date calculator on another page. I've also made a video showing this worksheet in action. Watch it below :

Younger kids might struggle with the worksheet given above - particularly those who haven't yet mastered long division. So, I've also prepared two simpler worksheets that they can use instead. The disadvantage is that these worksheets no longer work for absolutely any year.

The fact that these worksheets are limited to certain centuries is what makes them simpler. Half the calculations are already done, and in any case, the year is entered with only two digits instead of four.

Finally, since you may want to check these worksheets when offline, I've made up some tables of Easter dates in certain centuries. Check them out!