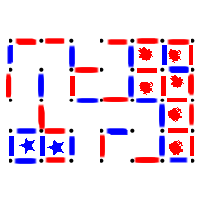 If you've never played dots and boxes, now is the time to start! It's a very simple game to learn, but the strategy gets quite complex.

I've provided here some dots and boxes game boards for you to print out and use - but of course you can draw your own!

To start the game, you draw a grid of dots, like this: 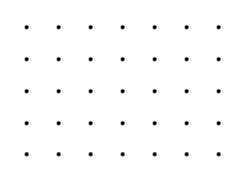 Players take turns to join pairs of dots with lines - the lines must be next to each other, either vertically or horizontally. After a while, the board might look something like this: 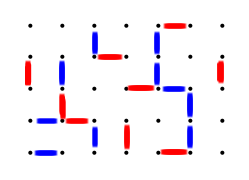 The game tends to follow two phases - in teh first phase, the players fill up the grid with twisty mazes of uncompleted squares, until finally, one player has no choice. They are forced to add the third edge to a square: 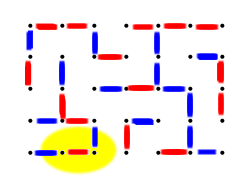 Now, the blue player can finish the square that red just played into. Since you get an extra turn when you finish a square, the blue player actually gets two squares, and then has to play somewhere that gives red some squares. 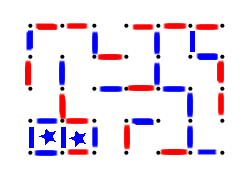 By the way, can ou think of a better move for either of these two players? Anyway, now red wins 6 squares, and plays again. 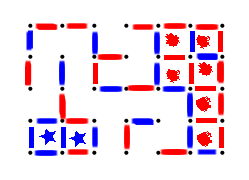 So in the second phase, the players take turns giving each other more and more squares each turn - if they play well! The winner is the player who wins the most squares. If each player gives the other the smallest possible number of squares, the winner will be whoever gets the last squares. So, in this second phase, you need to look for maze passages like the one below: 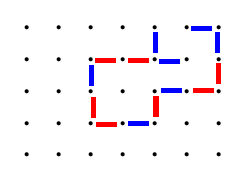 If you fill one of the edges in the big hollow square, you'll give your opponent 8 squares. On the other hand, if you fill one of the edges in the tail, you'll give your opponent only four squares, and the four remaining squares become another group of squares to be won later. The key thing here is this: a box with a tail like this gives you an opportunity to choose who fills in the last group of squares - maybe to change who plays last, and who wins. Giving your opponent four extra squares on a small board like the one shown is a very expensive choice, but it becomes very worthwhile on a larger board.

There are other configurations of little twisty passages of boxes that are similar to this "big box and tail". As you play, you'll get to know them, and be aware fo them as you play through phase 2 of the game. In fact, even during phase 1 of the game, you should keep these simple tips in mind - be the last to play, and use these special configurations if they aren't too expensive. Try to make sure that if you are the first to give your opponent some squares, that there are an even number of groups of squares to be won.