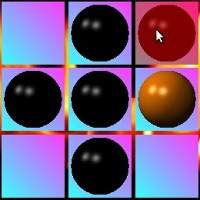 Some time ago, we bought a puzzle game for our kids, called "Flip-It". The game set comes with a 4x4 square board, a bunch of plastic turtles and some puzzle cards. You start the game by arranging the turtles on the board upside down. Then, you jump the turtles over each other. Each time a turtle jumps over another, the jumped turtle flips - either upside-down to right-side-up, or right-side-up to upside-down. The goal is to rescue all the turtles via a series of carefully planned jumps.

I haven't been able to find Flip-It on Amazon.com, or I would give a link here. However, I've made a similar game you can play online, called Color Switcher. There's also a printable version for offline play.

Choose from the options in the applet below. When a game board appears, you'll see that all the beads are black, like a bunch of switched-off light globes. Click on the beads to make them jump over each other. You'll have won when all the beads are switched on! The pictures below illustrate this :

For Flip-It, they asked a Japanese puzzle master to pick puzzles that would be interesting to solve. The puzzles in my online version were picked by a computer program using the same criterion. Have fun!


If you liked this game, you may also like Peg Solitaire.