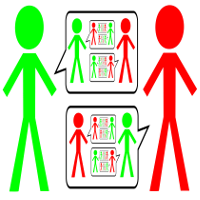 This is a page of logic puzzles. In a logic puzzle, you are given some clues, and have to use them to figure out some facts using purely logical reasoning. In the puzzles on this page, you must figure out which members of a group of people are lying, and which are telling the truth. On another page you can find puzzles where you determine who is guilty and who is innocent from a line-up of suspects.

I'm not sure how long puzzles like this have been around, but you'll find a lot of them in books by Raymond Smullyan, an amazing inventor of logic puzzles, who passed away in early 2017, aged 97. He once said "why should I worry about my death? I won't be around to see it," which gives you some idea of how his mind worked!

He would often frame his "truth and lies" logic puzzles as follows: you are on an island with two tribes; the members of one tribe always lie, but the members fo the other always tell the truth. They make some statements. Can you figure out who is who?

I've made a "logic puzzle generator" that generates puzzles like these. Here's one:

Would you like a New Puzzle? A Harder Puzzle? An Easier Puzzle?

If you think you know if someone is a liar or a truthteller, you can click on their name in the line-up below the clues. Keep clicking (or tapping) to toggle your answer. When you've decided who lies and who tells the trith, another button will appear allowing you to check your answers. There's also a link to generate a new puzzle, and change the number of people.

If you find these puzzles too brain-bending, try my other logic puzzle generator that makes less mind-contorting puzzles that you might like to start with instead.

By the way, feel free to use the puzzles generated here any way you like. If it's practical, please link back to this page. If formal permission notices are a thing you worry about, you can assume that the puzzles on this page (and the other) are provided under a Creative Commons Attribution license. Also, do let me know how you use them! I'd love to hear from you!

Here are some tips for solving this type of puzzle: