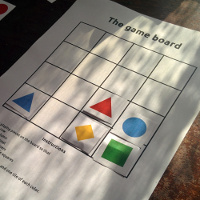 This puzzle has sixteen large playing pieces that you place on a 4x4 grid. You don't have to use the playing pieces or grids I've provided here, a pack of playing cards and an empty area of tabletop will do! Here's a photo of what the game puzzle looks like when it's being played: 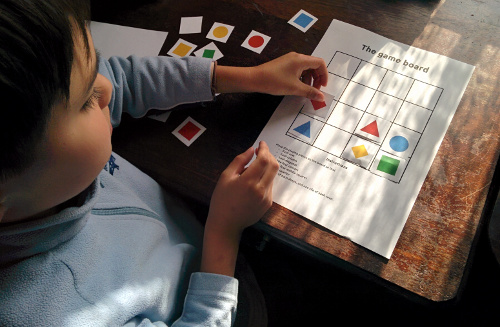 Now, let me explain the rules of the game: imagine you separate out from a pack of cards all the aces, kings, queens and jacks. You'll have sixteen cards, all different, four of each suit, four of each face. Then, the puzzle is to arrange them into a grid, four row, four columns, subject to certain conditions.

Here's a little animation showing all the sets of four cells described above:

If you don't have playing cards handy, or you want to make lots of colorful copies of this puzzle (for example, for a classroom), I've made some printable versions you can download, and make as many copies of as you like.