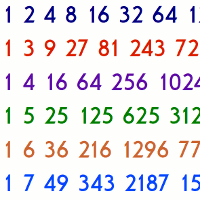 Here's an idea to get a class of kids exploring numbers with a calculator. At the end, I'll give a couple of challenges that should keep some occupied for a long time!

Let me introduce the puzzle by way of an example... Starting with the number 1, what happens when you keep multiplying by three? What digits does each of the numbers start with?

So the number 1 must be multiplied by 3 a total of 14 times before every possible 'first digit' is found.

Get the kids to try different combinations of starting number and multiplier, and record how many steps it takes for the starting digit to cover everything from 1 to 9.

Some important tips for doing this exercise, to make it more practical :

Now for the challenges! Ask your kids the following :-

Well, that's all for now. I hope it helps!