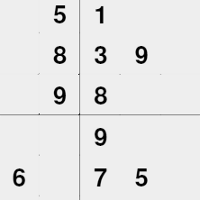 If you want to play sudoku online, you can do it right here. The applet below will generate sudoku puzzles of any difficulty you like, and give you a chance so solve them. If you love sudoku, I'm sure you'll love this online sudoku game!

Here's how to play this online sudoku game :

* To Choose A Cell move the mouse over the game grid, or use the arrow keys. There's no need to click
* To Write A Number key in the number, from 1 to 9. The game will not force you to follow the rules of Sudoku
* To Clear A Cell instead of typing a number, type 'space', 'del' or 'backspace'
* Enter annotation mode expert sudoku players like to mark 'possible' numbers in a cell, before they fill in the answer. If you are hovering over a cell and click or press 'Enter', the cell will turn green, and you can start typing in the possible numbers for that cell.
*Annotate the cell by pressing the appropriate number keys
*Exit annotation mode by moving to another cell or clicking or pressing Enter.
* Want to cheat? You can solve the whole sudoku puzzle instantly by pressing 'S'

This online sudoku puzzle is modified from the original, by a web application company called Zentense. They were kind enough to release it under an open source licence, which means anyone is free to copy, modify and distribute their online sudoku game, as long as the modified version is also made open source. Because they were generous enough to do this, I can make it available to you on this website.

Some other Sudoku resources on this website include some Printable Sudoku for kids, and a Sudoku Solver that can also generate Sudoku puzzles, and an infinite collection of printable sudoku puzzles!