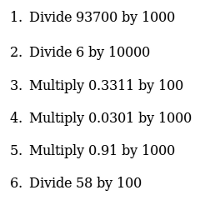 My son had trouble multiplying and dividing by ten, a hundred, a thousand, and so forth. When I sat down with him, I discovered the cause - he was using an outdated method.

To multiply by 10, you add a zero at the end

Then, I taught him a new rule :

Hopefully, this new rule will set him straight. My wife asked me to prepare some power of 10 multiplying and dividing practice questions, and I thought - I'm not going to be the only parent who wants a worksheet like that. So, instead of making one worksheet for my son, I made a worksheet generator. Now anyone who wants can make and print as many worksheets as they like for multiplying and dividing numbers by powers of ten. Use the form below, click 'Go!', and then print out the results. I hope it helps you and the kids you are trying to help!