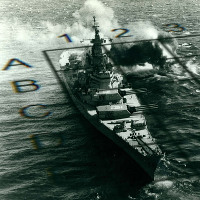 The other evening, my son said "let's play Battleships!". Sure, I said, and googled some grids to print out. By the time the printer was warming up, he'd dragged his elder brother into the game as well - but how do you play Battleships with three players!?

Our first game was very confusing, nobody was able to keep track of who had been hit, or where they'd already aimed. So for the second game, I put together some printable game grids that let you keep track of multiple opponents at once. Download the grids here, and print a whole bunch of copies - one for each player.

The rules we made up were simple enough, and mostly not much different from the normal rules of Battleships:

We didn't quite get to decide how exactly to end the game - when we played, I was about to win, when at the last second my 11-year old fired a lucky shot that simultaneously hit and sunk both my last boat and his elder brothers'. It was pretty clear who the winner was!

Here's a couple of ideas:

Of course, you should decide the rule for ending the game before you start playing!

If you want a longer game, with more opportunities for diplomacy, betrayal and revenge, you could try this variation:

So, grab some grids and a bunch of friends, and start playing!