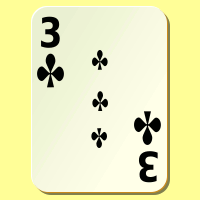 Have you ever heard of the card game "Cassino"? That's Cassino, not Casino. I got a nice email the other day from a fellow called Marsh Kaminsky, explaining how he used a variant of Cassino, which he called Mathino to teach his pre-school kids to love math!

For those who don't know the rules of Cassino, they're quite simple, and will definately give keen young players a lot of practice with their basic arithmetic. Here they are. Two (usually) or up to five players play at a time, and you can play with an ordinary pack of playing cards.

Aces count as 1's, of course. Picture cards normally don't have a 'value' as such, but they can be matched as per rule 1.

If you have a young kid, you might prefer to discard the picture cards, to make the rules simpler. Maybe even start with just rules 1 and 4. And when they are used to that, introduce rule 2, then later rule 3. Then your youngster will be getting lots of practice with addition.

Well, even plain vanilla Cassino can be a valuable "addition" (pardon the pun!) to your toolbox for teaching kids math. But Marsh Kaminsky's "Mathino" is a stroke of genius. Basically, instead of just using addition to build and take cards, he gradually introduced his kids to new rules : first subtraction, and later multiplication. The kids didn't know they were learning schoolbook stuff. For them, it was just new rules for a fun game!

Ever since I got his email about Mathino, I've been looking forward to trying it with my own 6-year-old son. I'll move straight on to Uno cards, so he doesn't just count the dots... But I thought his idea too good to wait before I shared it on this site. I hope it works wonders for your children too!