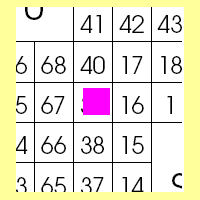 Let me explain how it works. If you download the math board game set, you'll see about 6 pages of printable stuff - the game boards, cards and playing pieces for the game. Let me explain what they all are.

The rules of the game are as follows.

Let me give an example to help clarify how a player takes his or her turn.

Suppose we were playing on game board A, and I had my piece on the square numbered 39. 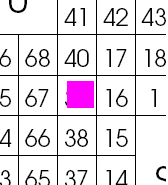 Then, suppose I drew the operation cards

, and the number cards 4, 9 and 4. In this case, I would have two squares available to move to.

Here are some suggestions to make the game easier or harder. Use your discretion to determine the best set of rules for the age group you are dealing with.

I'm sure there are many other possible variations. Please let me know if you or your kids invent one that's particularly enjoyable and instructional!

And by the way, thanks for using this game!