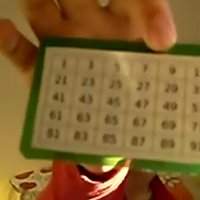 This web page gives you a classic "Guess My Number" magic trick, and some variations on it. For each of these tricks, the magician (or is that mathemagician?) asks the subject to think of a number, then shows him or her some cards. For each card, the subject tells the magician whether their number is written on the card. After all the cards are shown, the magician knows the number.

To get a better idea, just watch the video below.

From this page, you can download and print your own sets of cards, and read the instructions on how to use each set.

In the classic version of this trick, there are seven cards - you can download a set here. To use them,

For example, in the video, my first secret number was 35. It was written on three cards, the first numbers on these cards were 1, 2 and 35. My son worked out 1+2+32 in his head, and found my number, just like magic!

Of course, it's a good idea to practice first, to make sure you've got the idea of the trick - and are confident doing the addition in your head!

There are a couple of ways this trick could go wrong.

To make the trick more effective,

In the version above, you'll sometimes have to add six of the seven numbers - for example, if the subject picks 63 or 95. I've prepared another set of seven cards where the most addition you'll ever have to do is to add up five numbers.

With a set of only 10 magic cards, it's possible to divine any number from 1 to 1000! Of course, the cards are a lot bigger (and the numbers you have to add are a lot bigger too!), but if you're game, you can download and print the set of 10 cards that you need. Then, the trick proceeds as follows...

Getting numbers up to 100 with only 5 cards

When I was testing out the first set of magic cards, some people complained there were too many questions to answer. So, I made a new set, with five cards instead of seven - and slightly different rules.

If you download that cards you'll see that the cards have some numbers printed in red, and some in green. Also, the cards are labeled Card 1, Card 3, Card 9, Card 27 and Card 81. The way the trick works is like so :

For example, When you're doing this trick, there'll always be some green numbers. If there's no red number, the green total is teh secret number. To see this in action, try (say) 37 as the secret number.

Some tips and tricks for this version of the magic trick :