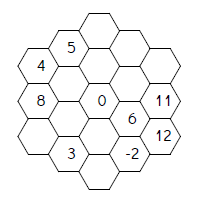 For a long time, this website has had a whole bunch of Magic Square Worksheets and other information about magic squares. Magic Hexagon puzzles are based on the same idea - arrange the numbers 1, 2, ... into a grid, with each row and diagonal adding to the same number - but this time, the grid is a hexagonal grid. Here's an example of a magic hexagon : 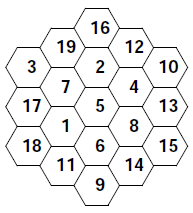 Well, that's not quite true - there's also the simple magic hexagon below :

Admittedly, that's not the most interesting mathematical thing in the world, but it is a magic hexagon!

A word of explanation about the choices here is called for. The Number Of Empty Cells controls how much work your students will have to do. If you make that number 2 or 3, there'll only be two or three numbers for them to work out. If you make it 15 or 16, you'll have a set of very difficult worksheets, some of which may have more than one solution! The Type of Worksheet determines which magic hexagons can be solutions to the puzzles.

When you download the worksheet, you'll see that the pdf file has two pages. The first page is the actual worksheet. The second page is the answer key. Each worksheet has four magic hexagons, but if you need more, just refresh this page and download another. If you think you'll want to download the exact same worksheets later (instead of generating a new random set), bookmark this URL of the generatoe worksheet - but don't give the link to your students or they'll have the answer key!

Anyway, that's all for now. Hope it helps!