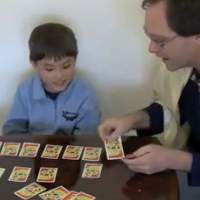 Here's a magic card-counting trick you can try. The trick goes like this. You (the magician) get a volunteer from the audience, and give them a portion of a pack of cards. Then, you tell them to discard some of their cards, so you have no idea how many remain. Then, you say "I will discern, with my magical powers, how many you have!", and finally you tell the volunteer, "You have the same number as me, except I have six (or however many) more, and enough to make yours up to thirteen (for example)."

Then, the volunteer lays his or her cards on the table, and you start to lay out yours. First, you lay out enough cards to match theirs (after all, told them you had "the same number as them....."). Then, you lay out your six (or whatever) extra cards (you did say "....and six more.....") Then you still have some cards in your hand, so you remind them you said ".... and enough to make yours up to thirteen", then start adding your remaining cards to theirs, counting them out. Tadaaah! You run out of cards exactly on thirteen! Magic!!

On this page, I'm going to teach you how to do this trick. You'll learn how to decide what numbers to say, and how to make sure that no disasters happen during the trick. First, Watch the video below to see the trick in action.

Got that? Now, here's how the trick works. First, make sure you have more cards than the volunteer. You can do this in a number of ways. You could ask them to divide the pack into two, and choose the bigger half - then ask them to discard some more, explaining that this means you really have no idea how many they have. Or, you could be the one dividing the pack.

Second, find out how many cards you have. If you are the one to divide the pack in the first place, you can make sure you know the number of cards without counting them in front of the volunteer. If you have to count in front of them, you can make it less suspicious by asking them to also count their cards - keeping them well hidden from you, of course, so you don't know how many they have. Another advantage of having them count their cards is that you can pretend you are reading their mind. Don't let other people know how many cards you have - it makes it too easy to guess how the trick works.

Third, think of two numbers that add up to your number of cards In the video, I had 16 cards, so I chose 4 and 12. Be sure that one of the numbers is more than the number of cards your volunteer has, or you'll be in trouble later.

Fourth, explain in your best magician's voice that you are now magically finding out how many cards they have. Then, tell them the result : if you had 17 cards, and the numbers you chose were 3 and 14, say "I have as many as you, 3 more, and enough to make yours up to 14". Explain this a couple of times so it's clear, then ask them to lay their cards on the table. Then show them that you do, indeed, have as many cards as them, 3 more, and enough to make theirs up to 14.

Finally, repeat the trick a few times - not more than 3 or four times though - so that people are amazed that you get it right every time, but don't have a chance to figure out how it works.

Now, for your benefit, I'll explain why this trick works. Notice that in the video, I had 16 cards, and my volunteer had 3. Then I said

If you're keen on algebra, here's how it works. Suppose you have Y cards, and your volunteer has V. You choose two numbers P and Q that add up to Y (so, P+Q=Y), and say

Now go and practice the trick in front of a mirror!