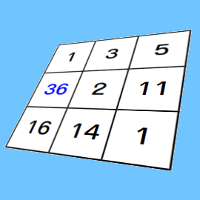 'Le Monde' is one of the biggest newspapers in France. Like all big newspapers, they publish puzzles. In 2013, they published a video explaining a new puzzle, 'La Grille De Sommes' (The Grid Of Sums). If you speak French, you can watch the video here. If not, read on!

The Grid Of Sums starts with an empty grid. Either a 3x3 square grid, or a 4x4 grid or bigger if you feel up to the challenge.

Then, you choose empty grid cells one by one. Each time you choose a cell, you add up its neighbors, and write the total in the cell you chose. If all its neighbors are empty, you write '1'.

Keep going until the grid is full. Your goal? Make the last number you write as large as possible! 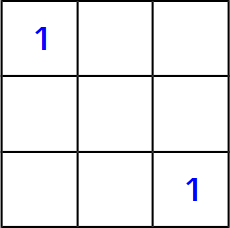 Next, I chose the middle square. The neighbors are the two corners I already filled. These add up to 2. 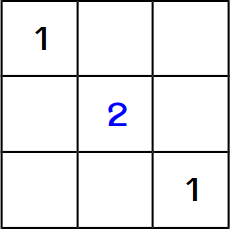 Then I chose the middle cell of the top row. It's only got two filled neighbours, I add them up and get 3. 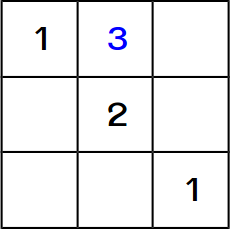 Next, the other corner of the top row gets filled with the number 2+3=5. 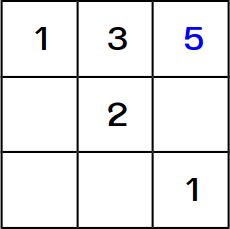 The last empty square on the right has four neighbors! I add them all up, getting 3+5+2+1, or 11. It looks like I'm making progress! I write the number 11 in the cell. 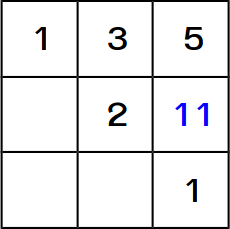 Now, I'll start working back along the bottom row. The neighbors of the middle cell are 2, 11 and 1, which add up to 14. 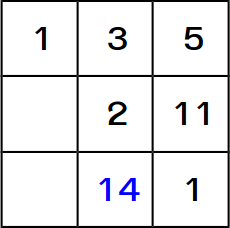 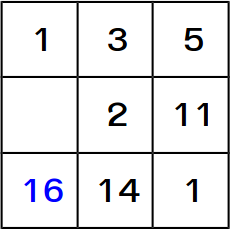 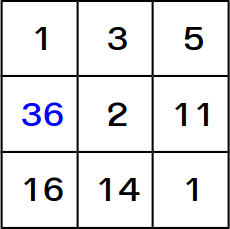 The biggest number I got is 36. That's not a bad score, but it's possible to do better.

Here are the square grids:

You can play the Grid Of Sums on any kind of grid. You might like to try it on a hexagonal grid. I've provided hexagonal grids with:

I have no idea what the best possible scores is for each of these grid sizes! You could also try rectangular grids, or look through my collection of unusual graph paper and mark out some wacky grid shapes.

Another variation you could try is this: try to make your biggest number as small as possible. My intuition is that this is easier than making your score large - so to make this variation more challenging, you can add this rule: except for the very first move, you can't choose cells with no neighbors.

You could also play Le Monde's Grid of Sums as a two player game.