I first saw Klikko a long time ago. I was in a shopping mall with my wife, and we saw a small promotional stand. A young fellow was touting an educational construction toy. He showed me how the brightly-colored plastic squares, triangles and other shapes snapped together with the help of black plastic joiners. I knew I wanted one - but that's just me. Is Klikko right for you?

There are zillions of construction toys out there on the market. The most famous, of course, is Lego. A boxed set of Klikko contains a large number of plastic tiles in the shape of regular polygons. There are also other pieces, such as cogs. The most important pieces are the joiners, which allow you to join the polygons edge-to-edge. The joins flex easily, so you can fold up your shape into a wide range of 3D shapes.

Here's a video I made recently showing my sone using Klikko to solve a fourth-grade math problem:

The video will give you a much clearer picture than my explanation!

My son enjoys Klikko. The boxed set comes with a card that gives some ideas for things to construct. We leave the set in his bedroom, and he often opens it up, and we find some tank or dinosaur or drum completed amidst the unused pieces scattered all over the floor. The drum shape in the video (technical name: a dodecagonal skew prism) was made by joining two flower shapes he saw in a picture on the card. He plays with Klikko more than with Lego, in fact.

Whoever invented Klikko had some mathematical knowledge - the large boxed set contains twelve pentagons, exactly the right number to make, say, a dodecahedron. However (and this is just me being picky), there aren't enough hexagons to make some interesting shapes, such as a truncated icosahedron (that is, a soccer ball). That would need a lot of hexagons, I admit!

You can get Klikko sets of various sizes from Amazon, at bit.ly/Klikko.

Lego gives you more flexibility about what to make. However, you need a lot more Lego to let your imagination run completely wild. Lego is expensive nowadays, but there are cheaper alternatives that are fully compatible. Modern Lego sets now come with multiple "specialised" pieces, and a Lego set normally has a specific "thing" you are intended to make, and only just enough pieces to make it. Lego is supposed to be a toy of imagination, but the price and presentation of modern Lego guides your child's imagination with a very firm hand.

Klikko, however, doesn't give you any specific guidance about what to make. The structures will be more abstract than a finished Lego structure - the pieces are larger, after all, and less specialised. The toy relies more on your child's imagination than Lego does - both in the fact that they don't tell you what to build, and the fact that what you build will look less like a "real thing".

Klikko is certainly the more mathematical toy. In fact, if you want to learn specifically about polyhedra with regular faces, Klikko is far, far better than any other construction toy (although I have seen sets similar to Klikko that use magnets embedded in the pieces instead of plastic joiners. I can't recall the name, but they were much more expensive than Klikko).

Finally, let me share one more picture with you: My son had to solve a problem about money. He'd been struggling with it. So I put some Klikko pieces into plastic bags, and asked him - "how many bags of each type should you buy, to make this shape?"

The problem he'd been struggling with became instantly clear, and he was easily able to solve it! 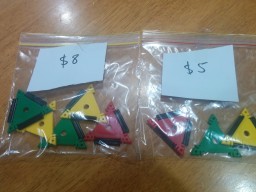