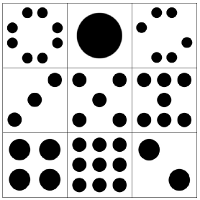 A while ago, someone commented on this site that they were looking for a bingo game for the numbers 1 to 10. It sounded like a good game for kindergarten kids, so I made one.

If you download the printable kindergarten bingo cards, you'll see that the download has 10 grids on 5 pages, each grid has 3 rows and 3 columns, with a selection of the numbers 1 to 10. These can be printed out, say onto cardboard, to make a set of simple 'bingo' cards. I've also made a set with dots instead of numbers.

Print out the cards, and distribute them to the kids you are playing bingo with. Then, start calling out numbers from 1 to 10 at random. As you call the numbers, the children should mark off the numbers on their cards. The first child to mark off an entire row, column or diagonal is the winner

There are several ways the children could mark off the cards :-

Have some small prize ready for the winner, of course.

Each winning group of three numbers only appears once in the whole set of cards, and after you call out four numbers, there will definitely be at least one of the four cards with a winning row, column or diagonal. To avoid having a winner after only three numbers, you should start the game with one of the following :

Well, there you have it... I hope your kindergarten bingo sessions all go well!