When I was a kid, my family's hobby was collecting Monopoly sets. Still in the cupboard of the old house, you can find the traditional monopoly, as well as British, French, Chinese editions, and I remember not what else.

In recent years, though, there have been bazillions of Monopoly editions produced. Deluxe, Mega, Here-And-Now, Star Wars, Pixar, Nintendo, Transformers, Spiderman... Evidently the owners of the Monopoly brand are onto a real cash cow. We've abandoned our hobby - it doesn't seem so meaningful any more.

Then, my son received a Junior Monopoly

set for Christmas. Naturally, I wondered...

Read on, and I'll tell you our experience with the game. 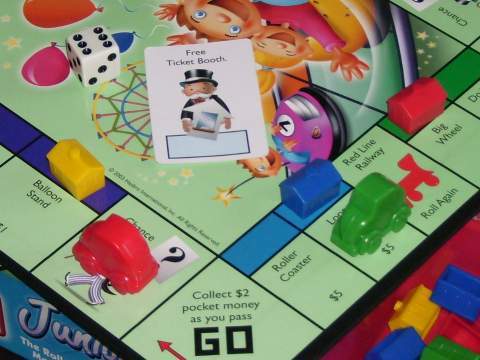 What is Junior Monopoly?

Junior Monopoly is not just a different edition of Monopoly. It's simplified to a level that kids can relate to (Parker Brothers recommends it for Ages 5 to 8)

My son was easily able to learn the rules of the game, and relate to the Amusement Park metaphor.

For kids aged 5 to 8 - well, for mine at least - a game isn't fun if he doesn't win, at least sometimes. Chess isn't fun, unless I let him win. One piece of good news about Junior Monopoly is that it's almost a game of chance.

What's more, when you're going to lose, it tends to happen quickly. There's far less of the psychological torture that Monopoly players are so familiar with - the slow attrition of your worldly wealth, into the hands of gleeful cheerful opponents, while vainly hoping for a miraculous rescue...

In any case, it's one of my son's favored games at the moment.

Junior monopoly was not specifically designed to be an educational game. However, there are opportunities for a parent to help their kids learn a bit of math while they play.

When you land at your kids' ticket booths, you have to pay for a ticket to ride on the ride. This can be an opportunity to teach them the concept of giving change. Unfortunately, the designers of Junior Monopoly have tried to take away this opportunity - the bills have denominations $1, $2, $3, $4 and $5, so there's almost never an actual need to ask for change. Two ways to overcome this are

If a player owns all the booths in a set, the ticket price is doubled. Here is an opportunity to teach your child the two times tables - at least up to 2x5=10... Just make sure you ask your child what is owed when someone lands there!

Junior Monopoly is a good fun game for kids aged 5 to 8. It's more complex than, say, Snakes and Ladders, so adults won't be completely bored. On the other hand, the children still have as much chance of winning as the grown-ups.

It's not very educational, but there are opportunities for kids to learn about money, about giving change, about simple addition and subtraction, and the first half of the two times tables.