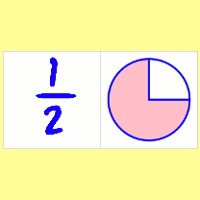 Here's a fraction activity for kids who are just starting on learning fractions. It's math fraction dominoes! I've made up a printable fraction domino set for you to download. Print them (in color or black and white), cut them out, and stick them onto thick card, balsa wood or stiff foam sponge to make a set of dominoes.

Each of the 49 dominoes in the set looks something like this :

As you can see, one side shows a fraction, written in numerals. The other side shows a fraction circle. The fractions in the set are 1/2, 1/3, 2/3, 1/4, 3/4, 1/6 and 5/6. Just about any game you can play with a normal set of dominoes, you can play with this set. Since there are 49 dominoes in this set instead of 28, you can have larger groups of kids involved in the fraction activity. On the other hand, smaller groups will work just as well as they do for ordinary dominoes.

For reference, here's the rules of dominoes, as I learned them as a child. Feel free to play by your rules!

Well, that's all. I hope it helps, and that your kids really enjoy fractions dominoes!