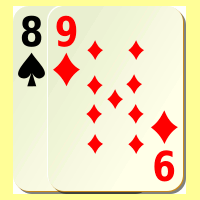 I wanted a simple card game to help teach basic addition facts. When I say 'basic', I mean really basic - at the level of 6+1=7. In the end, I came up with Fish Plus One.

Just as a reminder, here are the rules of "normal" Fish, a simple card game for two players.

Play continues until one player runs out of cards, or until there are no more cards to 'fish', and it's clear nobody can make a pair.

It's probably best to remove all the picture cards before playing - teaching a young child that J means 11, and so on, might be too confusing. I use UNO cards with my son, after removing all the special cards.

If your kids play Fish Plus One, they'll quickly learn their addition facts from 1+1 to 9+1. Then, they'll be ready for Fish Plus Two! In Fish Plus Two, 3 would match with 5 instead of 4, because 3 plus 2 equals 5.

Then, you can play Fish Plus Three, or Fish Plus Four, and so on. But it night be better to move to Fish Plus Plus

In Fish Plus Plus,

Fish Plus Plus is a lot more challenging than Fish Plus One. On the other hand, by the time your child is good at it, they'll also be good at all the basic addition facts up to 10!