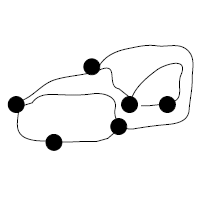 The dot-drawing game is not a join-the-dots puzzle, but rather a competitive, two-player, pencil-and-paper game. I'll explain the rules, and then explain how you can lead a class of students to use math to analyze the game. By playing, your kids will gain a sense of spatial relationships. By analyzing it, they will see how math is sometimes hidden in surprising places, and the one who uncovers math's hiding place can often use it to great advantage. It is my hope that at least some of the kids in your class will then begin to wonder - where else is math hiding in everyday things? As they find answers, some at least will gain a deep appreciation for the subject, which will stay with them for many years.

So - the rules of the game first.

If these rules are not so clear, there's an example game shown (starting with only two dots) in the prepared gamesheet.

As kids play this game, it will improve their sense of space, as well as their strategic thinking skills. After playing a number of times, the kids should be able to figure out a few elements of strategy by themselves, for example :

I suggest you pair up your class, and let them become familiar with the game, before moving on to the next stage.

Now to unlock the math hidden behind this game. You could, of course, just give the key directly to your class. However, it's much better for the children's appreciation of the math if they discover it themselves. The activities described below will help make that happen.

First, ask the class to play a few games, starting with three dots, and make a table of the results. The headings of the table should be :

For example, in the example game in the game worksheet, these answers would be Player 2, four moves, six dots, eight edges, and four pieces.

The players should notice some patterns after a while. In particular :

Now ask them to play a few more games, but starting four dots, or two dots, or five dots. This will help them identify more complex patterns, and perhaps the reasons behind the patterns. For example :

You could then encourage your students to explore other questions, such as

Let me now describe another path your class could explore. The original rules state :

Draw a line, then draw a dot on the line
This is exactly the same as saying
Draw a dot, then draw two lines from that dot.

You could start the second exploration by getting your class to play "a new game" with the "new" rule. Soon they will click that it's actually the same game.

Another part of the rules say

You can start the second exploration by pointing out these two numbers in the rules :

Then, remind the class how they've already seen two different versions of these rules :and Invite the class to try (in pairs) other versions of these games, and ask them this question :
"What numbers make the game more or less interesting, and why?"
With luck, the students will notice the following pattern :