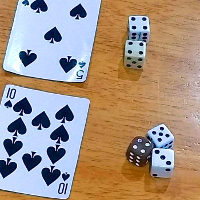 I was chatting with an acquaintance online, and he told me about a game he was playing with his daughter to help her learn how to count - Dice War! I asked him what the game was about, and he explained.

This game can take a while - on average it will take about 120 rounds to find a winner, starting from ten dice each, but ity may take longer or shorter.

I tried this game with my son (who is well and truly beyond kindergarten age, so this was just for fun). We started with six dice each, and I won in seven rolls. So, we played again. The second time, though, he had sneaked a 12-sided die into one of his pockets, and brought it out mid-game. He won that one!

As we played the game, it morphed into a complicated battle game using cards and dice, which we decided to call Dice of Destiny. Here's how to play:

Briefly, the cards you have are your army. During the course of the game, you send squads of troops from your army to battle the enemy. If you win the battle, the enemy's squad joins your army. The winner is the player with the largest army at the end.

And that's it! The winner is the player who has the most cards at the end. Here's an animation showing a single battle between two squads:

Of course, since I've got two sons, we had to invent a multiplayer version as well:

Again, the winner is the player who has the most cards at the end.

And that's all! Have fun playing Dice of Destiny!