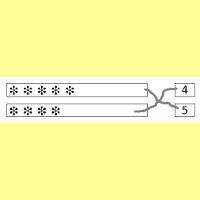 I've uploaded several counting worksheets here on this page. Each has several items that look like the picture shown just above. Here's a suggestion how you might use them.

The reason to watch is so that you can identify bad counting habits in the child and correct them. It's no use just saying "right" or "wrong"! Some possible bad habits (at kindergarten age) include

Once the child is reasonably confident, he or she can be left to enjoy the worksheets alone. Just pop in from time to time, to offer encouragement and congratulations, or, if needed, a little gentle correction.

Counting should be fun! And these counting worksheets, if used wisely, can help to make it so.