On the 20th of August 2008 this website turned 3 years old. To celebrate, I organized a competition. The competition was to think of the biggest number possible, and write it in a 4 inch by 2 inch box. The contest closed on October 27, and this page gives the results of the contest.

Well, it was fascinating judging the entries! A few students submitted entries that worked out as "infinity", even though this was against the rules. I guess they missed that part, or were hoping I'd forget it. 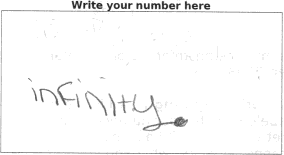 Sorry, but I have to disqualify infinity, for a couple of reasons... One entry in particular made me smile... 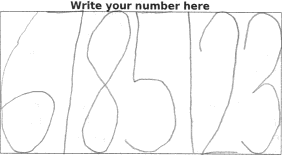 Well, it's certainly a LARGE number in one sense! Unfortunately, not in the sense I meant for the competition.

I noticed that most people just packed as many digits into the box as they could. Almost nobody used powers, which makes me wonder - perhaps the contest would be better pitched to high school students?

I'm wondering how tough it would have been to judge the entries if I had opened it to grades 8-12, and received dozens of entries...

The most astounding thing is that there was a tie for first place! That's right, the two highest numbers amongst all valid entries from grades 1 to 7 were exactly the same number! 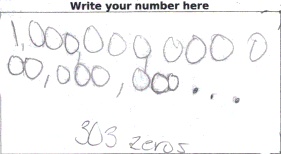 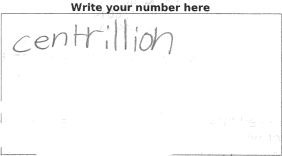 So, congratulations to Lilian from Ohio, and QuaMekka from North Carolina! You are each the equal champion of the big numbers contest, and the overall champ in your respective grades!

Anyway, if you missed the competition, you can organise your own. See original contest entry page for more details.