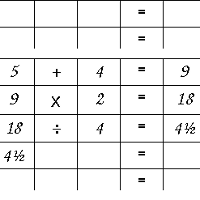 I was wondering how I could make a good arithmetic math game for kids. A game that would make arithmetic fun - a competitive game. A math game with elements of strategy, luck, and good old fun. A few ideas ran through my head, until suddenly - aha!

If what I've described is what you are looking for in an arithmetic math game, well your search is over. Read on, and I'll explain :

Ok, the pieces first. If you download and print this file, you'll then have

It's best to print everything onto cardboard. To make the dice, first press along each fold with a blunt knife, then fold and glue the tabs to the inside of the faces, so the printed symbols face out.

This will be troublesome for some people - especially if you are a teacher and you want to get your whole class playing this game. Here's some tips to make life easier.

Once you have the different playing pieces ready, start the arithmetic math game as follows.

The players then take turns, in an anticlockwise direction, until there is a winner. On each turn : 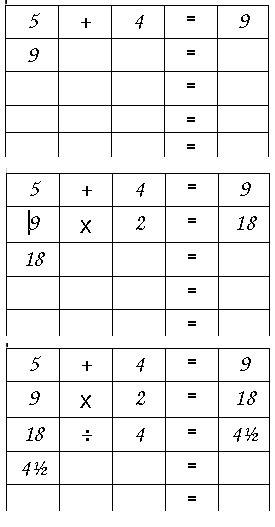 The pictures at the right show what a player's game worksheet might look as a game progresses. Suppose their starting number was 5.