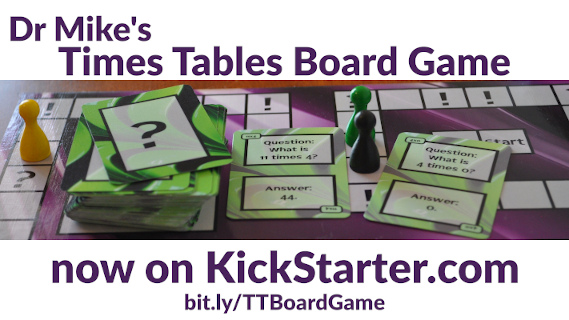 News flash! My Times Tables Board Game is now on KickStarter! See how you can reserve your copy by visiting the KickStarter page now!

Since I first heard of sudoku puzzles, I wondered if I should put a sudoku page on this website. However, I didn't want to make "just another" sudoku page. Well, recently one of my former math lecturers (Grant Keady) told me about a set of sudoku puzzles he's made, suitable for kids. These are full-sized puzzles, but the squares are color-coded so that you know which cells to tackle first. An example is shown at the right. 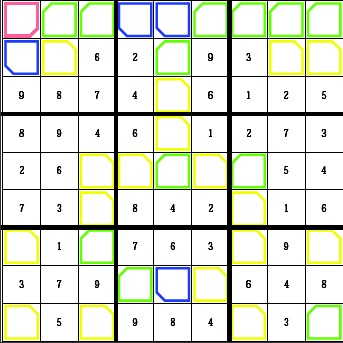 A Sudoku Puzzle With Hints. The idea is to fill in the yellow squares first, then the green squares, then the blue, and finally the pink squares. This is the order an expert sudoku player might do them in anyway, but it helps kids (or adults) unfamiliar with sudoku to quickly find out promising squares to figure out.

A great feature of Grant Keady's kids' sudoku puzzles is that you don't actually need a color printer to benefit from them! Note that each colored square has a corner chopped off - so if you've printed them out in black and white, just tell your kids to solve the cells with the corners cut off, starting with all those missing the NorthEast corner, and then NorthWest, SouthWest and finally SouthEast (that is, work around the compass in an anticlockwise direction).

You can get more of Grant Keady's "Sudokus For Kids" from his website.

Some other sudoku resources I've collected together on this site :

These applets are both open source, meaning you can take them and modify them if you see some way to improve them.

So have fun playing sudoku!